A special company was formed in many of the American regiments, following the British system, of active, well disciplined men to function as light infantry scouts and skirmishers.  At times all the American light infantry were gathered into an elite battalion for specific missions.  The battalion of well trained and equipped soldiers that Delaware sent to join Washington's Army before the battles of Long Island and White Plains were all wearing this type of cap, including officers and musicians.  the clothing that arrives from France in 1778 for the entire army, including the light troops, was apportioned to the states' Continental regiments as follows:

Some Massachusetts, Virginia and Delaware regiments were issued the dark blue faced red uniforms because of their availability.

Coloring information for Series 42 is for the Delaware Battalion and Congress' Own Light Company.

Use this drop down menu to pick the American Light Infantryman you want.

The following pictures are examples of this regiment in different poses 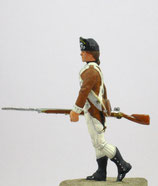 other poses are avaialbel see above

other poses available see above

MADE IN THE USA

•These products are sold as kits, unassembled and unpainted

•Not for children under 14